The lil' musicians at Parents Morning 2009

The children at our centre performed at the Parents Morning 2009 (November). They showcased what they had learned throughout the year in their ABC Music & Me (created by Kindermusik) lessons.
The 2 to 4 year-olds were much easier to manage than the 4 to 6 year-olds. The younger ones followed instructions and developed great listening skills throughout the course and ta-da! They were perfect during their performance of pretending to be little Robins searching for food by following the musical cues. This was a great achievement for the children! I was so proud of them. Some parents feedbacked it was a great success!
Also thanks to the teachers who took great pain in sewing all the sequins for the wings and bibs! 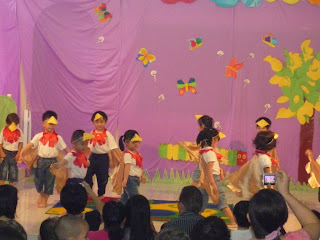 The little Robins woke up as they heard the cues for the Sun to come out. 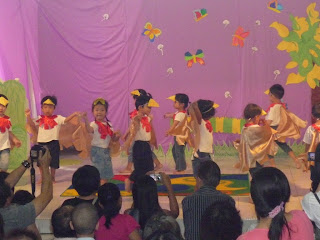 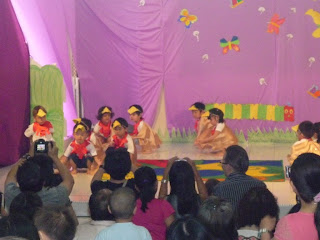 The little Robins started to hop on the ground to look for food when they heard the staccato notes.


The 4 to 6-year olds were usually over-excited during their ABC Music & Me classes that they were harder to manage. They told me they loved the lessons so much that they started dancing non-stop even though I asked them to stop. I did not know whether to laugh or cry when I heard this. I wanted them to develop listening skill, so it really took me about 6 to 8 months to really know how to manage them.
Nevertheless, they were a lovely bunch. During the practice sessions for the Parents Morning, they cooperated. No one made any fuss when they were asked to be fixed to just one type of instrument being assigned to them. They were able to do the call-and-response rhthym using the drum and the sticks and play their little instruments in an ensemble. Bravo! I was also thanking god that I could take the role of the conductor due to my school-day experience of being a student conductor in the Chinese Orchestra! So what I did when I was young really came into handy. 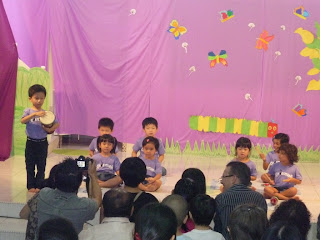 Oscar playing the drum to the rhythm of tas and ti-tis. The other children responded to his drum rhythm by playing their sticks. Hence, the results were the sticks being the echoes of the drum. 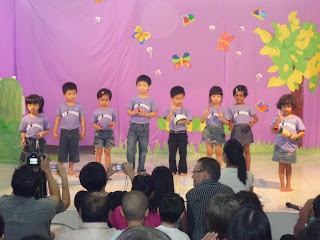 During an ensemble to the Twinkle Dance, they really exercised their steady beats with their instruments. Zhi Hui, Oscar, Uma and Kareena played the major part of the music, Jia Jun, Jeslyn and Royce played the minor part. They all played in unison at the last part of the music.

They were not nervous at all with the spotlights on them! I love them all.

Posted by the little clovers at 11:38 PM 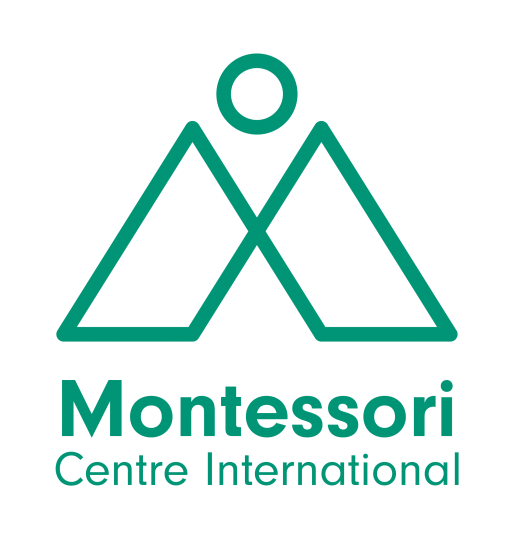